Normal pressure hydrocephalus (NPH) is a clinical symptom complex caused by the build-up of cerebrospinal fluid. This condition is characterized by an abnormal gait, urinary incontinence, and (potentially reversible) dementia.

Patients present with a gradually progressive disorder. As noted above, the classic triad consists of abnormal gait, urinary incontinence, and dementia. The gait disturbance is typically the earliest feature noted and considered to be the most responsive to treatment. The primary feature is thought to resemble apraxia of gait. True weakness or ataxia is typically not observed.

The gait of NPH is characterized as bradykinetic, broad-based, magnetic, and shuffling. The urinary symptoms of NPH can present as urinary frequency, urgency, or frank incontinence. While incontinence can result from gait disturbance and dementia, in a study by Sakakibara and colleagues, 95% of patients had urodynamic parameters consistent with detrusor overactivity.

The dementia of NPH is characterized by prominent memory loss and bradyphrenia. Frontal and subcortical deficits are particularly pronounced. Such deficits include forgetfulness, decreased attention, inertia, and bradyphrenia. The presence of cortical signs such as aphasia or agnosia should raise suspicion for an alternate pathology such as Alzheimer disease or vascular dementia. However, comorbid pathology is not uncommon with advancing age. In one study, more than 60% of patients with iNPH had cerebrovascular disease.In another similar study, more than 75% had Alzheimer disease pathology at the time of shunt surgery.

Patients commonly present with a gait disorder and dementia. On neurologic examination, pyramidal tract findings may be present in addition to the above findings.

Normal pressure hydrocephalus may occur due to a variety of secondary causes but may be idiopathic in approximately 50% of patients. Secondary causes of NPH include head injury, subarachnoid hemorrhage, meningitis, and CNS tumor. Another potential cause could be previously compensated congenital hydrocephalus.

After a detailed history and physical examination, further diagnostic testing is required to establish a diagnosis. In general, laboratory testing is unhelpful. However, imaging tests are invaluable in the diagnosis of this disease.

In most cases of new onset neurologic symptoms, a CT scan of the brain is initially obtained. Although MRI is more specific than CT in NPH, a normal CT scan can exclude the diagnosis. CT and MRI findings in NPH include the following: 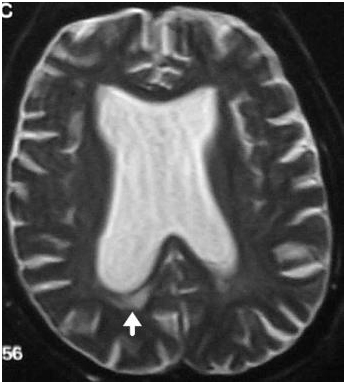 T2-weighted MRI showing dilatation of ventricles out of proportion to sulcal atrophy in a patient with normal pressure hydrocephalus. The arrow points to transependymal flow. 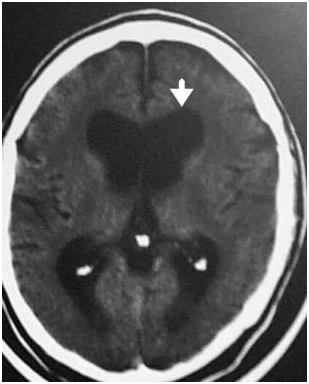 To establish a diagnosis of NPH (and exclude hydrocephalus ex vacuo), an MRI or CT must show an Evan’s index of at least 0.3. In addition, one or more of the following must also be present: 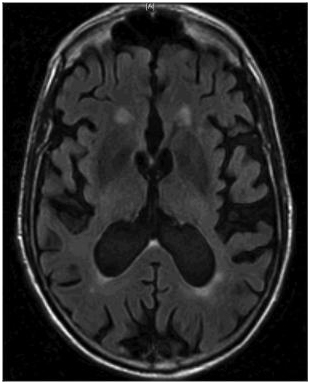 This image shows ventriculomegaly, which is typical in hydrocephalus ex vacuo. 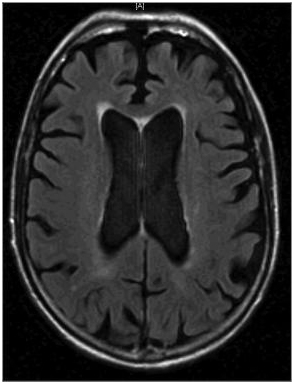 This image shows cortical atrophy, which is the defining feature of hydrocephalus ex vacuo.

Additionally, the presence of abnormalities such as an Arnold Chiari malformation raise the possibility of a congenital hydrocephalus.

All patients with suspected NPH should undergo diagnostic CSF removal (either large volume lumbar puncture and/or external lumbar drainage [ELD]), which has both diagnostic and prognostic value. When the CSF opening pressure is greatly elevated, other causes of hydrocephalus should be considered, although CSF pressures may be transiently elevated in NPH. Improvement in symptoms with large volume drainage is supportive of the diagnosis of NPH.

A levodopa challenge may be helpful to rule out idiopathic Parkinson disease. Patients with normal pressure hydrocephalus (NPH) have no significant response to levodopa or dopamine agonists.

Surgical CSF shunting remains the main treatment modality. Prior to embarking upon surgical therapy, knowing which patients may benefit from surgery is necessary. Detailed testing is performed before and after CSF drainage.

Initially, patients are given a baseline neuropsychological evaluation (eg, Folstein test or formal neuropsychological evaluation) and a timed walking test. Patients then undergo a lumbar puncture with removal of approximately 50 mL of CSF. Testing is then repeated 3 hours later. A clear-cut improvement in mental status and/or gait predicts a favorable response to shunt surgery. Improvement in gait may be seen in the form of reduced time to walk a fixed distance, reduced gait apraxia, or reduced freezing of gait. Videotaping the gait evaluation before and after the large volume lumbar puncture or lumbar drain placement can be helpful in decision making. Reduction in bladder hyperactivity also may be a sign of good outcome from shunting. Occasionally, improvement may be delayed and appear 1-2 days after the large-volume lumbar punctures. For a more objective assessment, videotape the timed walking test before and after lumbar puncture.

While large volume lumbar puncture was the earliest invasive diagnostic test in predicting response to shunt surgery, external lumbar drainage (ELD) is being used with increased frequency. In this method, clinicians use an indwelling CSF catheter in lieu of repeated lumbar punctures. The drainage catheter is generally left in place for 3-days, allowing sufficient time for a return of neuronal function. This method carries a higher risk of meningeal infection but may allow for a more accurate prognosis.

In a prospective study of 151 patients with suspected idiopathic NPH, all patients underwent ELD. Patients with clinical improvement after ELD were offered shunt surgery, 90% of whom improved. Others have confirmed the positive predictive value of improvement after ELD. Less clear, however, is the negative predictive value of ELD. In one study, 64% of patients who underwent shunt surgery had improvement, despite a negative ELD result. Thus, given the dramatic improvement in the quality of life for shunt responders, some have advocated for less reliance on predictive testing. Given the potential morbidity and mortality of shunt surgery, however, this has not been widely adopted.

An alternative method of predicting response to shunt surgery is CSF infusion testing. In this test, 2-lumbar drains are placed; one is used for continuous pressure monitoring, and the other is used to infuse solution into the CSF space continuously. Elevated pressures during infusion are specific for shunt-responsive NPH; however, due to the lower sensitivity and potential morbidity, this is infrequently used.

Patients with a good response to predictive testing should be considered for ventriculoperitoneal or ventriculoatrial shunting. The best results are reported in patients who have no adverse risk factors; have responded favorably to a large-volume lumbar puncture; and have definite evidence of dementia and ataxia, CT scan or MRI evidence of chronic hydrocephalus, and a normal CSF at lumbar puncture. Some evidence indicates that patients with gait disturbance, mild or no incontinence, and mild dementia fare best among shunt surgery patients.

Another modality without significant current use is isotope cisternography. The method involves injecting a radiolabeled isotope into the CSF space. Using this method, the excretion of the isotope can be monitored. Lack of visualization of the isotope over the brain (impaired absorption of the arachnoid villa) suggests a diagnosis of NPH. This test is rarely used due to the low positive predictive value with regards to shunt-responsiveness.

The clinical usefulness of cisternography was evaluated in a large-scale study by Vanneste et al.The predictive value of a scale based on combined clinical and CT scan criteria was established first, followed by an assessment of the predictive value of cisternography. Predictions based on cisternograms were identical to those of the clinical/CT scan scale in 43%, better in 24%, and worse in 33%. This suggests that cisternography does not improve the diagnostic accuracy of combined clinical and CT scan criteria in patients with presumed normal pressure hydrocephalus.

In summary, an ideal candidate for shunt surgery would show imaging evidence of ventriculomegaly indicated by a frontal horn ratio exceeding 0.50 on imaging studies along with one or more of the following criteria:

An alternative technique to shunt surgery is gaining some currency. This involves endoscopic third ventriculostomy (ETV). Although it has been previously used in noncommunicating hydrocephalus, its use has also been examined in patients with NPH.

One study examining this technique followed a series of 36 patients divided into a group of 29 patients with secondary communicating hydrocephalus and a group of 7 patients with normal pressure hydrocephalus. Sixteen (44.4%) of the patients had a previous ventriculoperitoneal shunt placement that presented with shunt malfunction. ETV was considered successful in 27 of 36 patients (75%). A Kaplan-Meier analysis revealed that the successful proportion of ETVs in secondary communicating hydrocephalus at 0.5, 1, and 3 months of follow-up was 0.83, 0.8, and 0.77, respectively; in the idiopathic NPH group, it was 0.83 initially and became stable at 0.66 after the first month. However, these results need to be replicated with larger series before the use of this technique is determined.

A neurologist should be initially involved in the evaluation of suspected NPH, at which time a lumbar puncture is performed. For appropriate patients, the neurosurgical consultation should also be obtained.

No definitive evidence exists that medication can successfully treat NPH. While levodopa/carbidopa has been reported to be of benefit in anecdotal reports, these patients with NPH may represent misdiagnosed cases of parkinsonism. Currently, no definitive evidence exists that levodopa/carbidopa is an effective treatment for NPH. In patients who are poor candidates for shunt surgery, however, repeated lumbar punctures in combination with acetazolamide may be considered.

The overall prognosis of NPH remains poor both due to a lack of improvement in some patients following surgery as well as a significant complication rate. In a study by Vanneste et al., one of the more comprehensive studies described above, marked improvement was noted in only 21% of patients following shunt surgery. The complication rate was approximately 28% with death or severe residual morbidity in 7% of patients, further emphasizing the importance of careful patient selection. Concomitant cerebrovascular disease is a recognized negative prognostic factor.

In a small prospective study, Hamilton et al. measured the impact of cortical Alzheimer disease pathology on shunt responsiveness in 37 individuals treated for idiopathic NPH. Clinical measures, including neuropsychometrics and gait, were correlated with amyloid β (Aβ) plaques, neuritic plaques, and neurofibrillary tangles observed in cortical biopsies obtained during shunt insertion. Patients with no tau and Aβ pathology and mild tau and Aβ pathology improved on the neuropsychometric and gait evaluations. In contrast, patients with moderate-to-severe pathology did not show improvement on any study measure; however, the relatively small numbers in the study, the presence of contradictory studies, and the absence of a widely accepted biomarker for Alzheimer disease make it difficult to use this finding while evaluating patients with NPH.

In patients who develop recurrent symptoms after initial improvement, shunt malfunction should be suspected, and evaluation for mechanical failure should be pursued. In some of these cases, catheter migration may have occurred, which is a correctable cause of shunt malfunction. In one case series, shunt revision was required in more than half of treated patients over a 6-year period, with improvement in most of these patients.