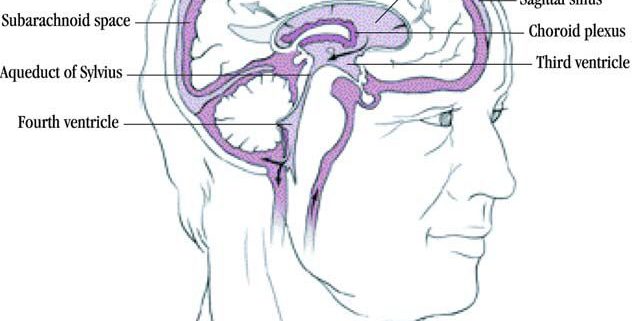 Posttraumatic hydrocephalus (PTH) is a frequent and serious complication that follows a traumatic brain injury (TBI). PTH could greatly impact morbidity following a TBI and could result in increased mortality if it is not recognized and treated.

PTH may result from 1 or a combination of pathophysiologic factors. It can be caused by the overproduction of cerebrospinal fluid (CSF), the blockage of normal CSF flow, or insufficient absorption that results in excessive accumulation of CSF around the brain. Ultimately, PTH is caused by an imbalance that occurs between CSF production and absorption.

PTH may present as normal pressure hydrocephalus (NPH) or as a syndrome of increased intracranial pressure. Because of differences in prognosis and treatment, PTH needs to be distinguished from cerebral atrophy (i.e., hydrocephalus ex vacuo) and ventricular enlargement caused by a failure of brain development. If PTH goes unrecognized or untreated, increased morbidity or mortality following a TBI is more likely.

Conversely, in communicating hydrocephalus (also referred to as nonobstructive hydrocephalus), full communication between the ventricles and the subarachnoid space exists. Impaired CSF absorption may cause communicating hydrocephalus. The apparent mechanism is partial occlusion of the arachnoid villi, perhaps by blood and inflammatory mediators. Severe skull fractures, hemorrhage, and meningitis may predispose patients to this variant of PTH. Another possible mechanism is increased duralsinus pressure, causing decreased CSF outflow.

NPH, a form of communicating hydrocephalus, may result from subarachnoid hemorrhage caused by an aneurysm rupture or a TBI, encephalopathy, or Alzheimer disease. NPH often presents as the classic triad of a progressive gait disorder, impairment of mental function, and urinary incontinence. In NPH, ventricles enlarge despite normal or even slightly reduced intracranial pressure, and they continue to press against brain parenchyma.

Obstructive hydrocephalus may be caused by tumors, infection, abscesses, cysts, or trauma. NPH may result from a subarachnoid hemorrhage caused by an aneurysm rupture, a TBI, or encephalopathy.

Older age and low consciousness level are independent risk factors for the development of PTH during rehabilitation in patients with severe TBI.

Another study, by Vedantam et al., indicated that in cases of severe TBI treated with decompressive craniectomy, patients with interhemispheric subdural hygromas and of younger age are at greater risk for the development of shunt-dependent PTH.

By volume, the intracranial contents include the following:

CSF is primarily produced in the lateral ventricles by the choroids plexus at a rate of 500 mL/d. The CSF flows down toward the third ventricle through the foramen of Monro and into the fourth ventricle through the cerebral aqueducts. The CSF then exits the ventricular system through the foramen of Magendie (medially) and the foramen of Luschka (literally) and flows into the perimedullary and perispinal subarachnoid spaces. The CSF continues around the brainstem to the basal and ambient cisterns. It then flows to the lateral and superior surfaces of the cerebral hemispheres, where it is largely absorbed through the arachnoid villi. The total volume of CSF is replaced several times daily.

The onset of PTH may vary from 2 weeks to years after TBI. Studies cite a wide range of incidence (0.7-50%); part of this variation results from underdiagnosis and atypical presentation, as well as from the fact that different sets of clinical criteria are used to diagnose PTH.

Mazzini and colleagues found that 50% of patients with post-acute phase severe TBI had PTH but that only 11% required surgery.

In a multi-year study, Kim and colleagues followed 789 patients who had suffered a TBI, diagnosing PTH in 129 (16.3%) of them. Sixty-four patients with PTH required shunting.

Posttraumatic hydrocephalus (PTH) often has an atypical presentation and therefore may be easily missed. A high level of clinical suspicion is important for diagnosis.

The cognitive decline of NPH may present similarly to dementias in elderly patients. However, Alzheimer disease more commonly presents insidiously over a period of years, with progressive memory impairment, anomia, apraxia, agnosia, and a decline in executive function. Dementia in NPH usually presents with subcortical features.

These include the following:

Pertinent laboratory studies include the following:

Shunting is the most common treatment for hydrocephalus. The outcome is typically favorable. A shunt is usually placed from the right ventricle to the peritoneal space. The right side is normally used to avoid injury to the language centers on the left side of the brain. Shunts are most often equipped with reservoirs that are used for transiently increasing output and for testing the patency of flow.

The resumption of rehabilitation is usually prompt after the placement of a ventriculoperitoneal (VP) shunt. Patients are typically observed for 2-3 days postoperatively. They then return to rehabilitation services to complete their brain-injury rehabilitation program. Successful shunting is usually related to more obvious and rapid improvements during rehabilitation efforts.

The resumption of rehabilitation is usually prompt after the placement of a ventriculoperitoneal (VP) shunt. Patients are typically observed for 2-3 days postoperatively. They then return to rehabilitation services to complete their brain-injury rehabilitation program. Successful shunting is usually related to more obvious and rapid improvements during rehabilitation efforts.

A study by Weintraub et al indicated that earlier shunting in posttraumatic hydrocephalus (PTH) is associated with improved rehabilitation outcomes. The study involved 52 PTH patients who had a VP shunt placed, with the period from injury to placement ranging from 9 to 366 days (median time, 69 days).

If PTH goes unrecognized or untreated, increased morbidity or mortality following a TBI is more likely.