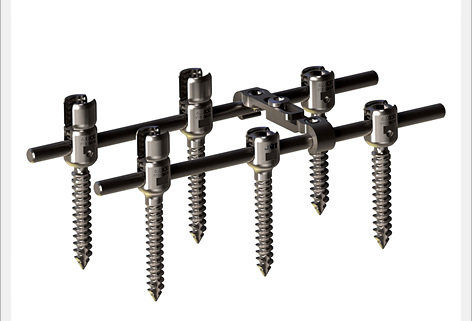 In the wake of research that uncovered high levels of contamination in “sterile” implants, researchers are calling for the elimination of rewashing and resterilizing of pedicle screws in spinal fusion surgery.

These researchers, including the president of the North American Spine Society, Jeffrey C. Wang, MD, and other leaders in the field, believe that intraoperatively guarded, presterilized, individually packaged implants are safer and more effective than “reprocessed” implants.

They also maintain that the use of such prepackaged implants would reduce costs associated with surgical site infection (SSI).

“As patients aren’t aware of this problem, they can’t choose these implants for themselves, so we must do so in their absence,” he said.

In about 90% of spinal fusion procedures, pedicle screws are used to anchor spinal segments, and titanium rods are used to connect the anchors. These screws comprise three small subcomponents: the head, which is a hollow cylinder to which a rod is attached; a threaded shaft, which goes into the bone; and a washer that connects the head and shaft.

During a spinal fusion procedure, a surgeon typically opens a tray containing about 150 screws of different sizes and chooses the six or so needed for that particular surgery.

“The remaining screws are washed again — or reprocessed — with the used instruments that are full of blood, tissue, fat, and other particles from the surgery that just finished,” said Agarwal.

The interfaces of pedicle screws and other orthopedic implants have extremely low permeability, he said.

“Every wash after surgery results in small particles of tissue, soap, and fat being stuck in the small features or interfaces of the implant, and there are also gradual chemical changes and erosion of the material itself,” he said.

A study led by Agarwal and colleagues, published in the Global Spine Journal, proved that this was the case.

For the study, the researchers randomly selected six pedicle screws from four different trays of cleaned, wrapped, and sterilized implants. Using clean gloves, they retrieved the screws and immediately placed them inside sterile ziplock poly bags.

They then disassembled the screws and sent them for testing, which included optical microscopy, scanning electron microscopy with energy dispersive spectroscopy and Fourier transform infrared spectroscopy.

The study revealed three types of contaminants on the screws: corrosion; saccharide of unknown origin, including biofilm, endotoxins, and fatty tissue; and soap residue mixed with fat. In addition, a salt residue was found at interfaces.

These contaminants may be responsible for inflammatory reactions or SSIs. Research suggests that such infections occur at a rate of about 12.7% following spinal fusion. This contradicts the previous estimates of 4%, said Agarwal.

SSIs add “an enormous burden to individuals and society in terms of medications, reoperations, extended stays in hospital, lost productivity and wages, and emotional and physical trauma afflicted on patients and their families,” the investigators note.

The average cost of hospitalization resulting from such infections is $63,000 per case. That cost doesn’t take into account underestimations of infection rates and the “hidden/occult infections” that can occur later and that can cause hardware failures or infections, said Agarwal.

Although the exact source of the contaminants identified in the study is unclear, Agarwal noted that foreign material residues on the inner surfaces and at the interfaces of a pedicle screw are “unacceptable” for immunocompromised patients. “Many people who undergo these surgeries are already immunocompromised. Why burden them with more germs?” he asked.

It’s “impractical” to clean and sterilize small implants that have multiple components and interface clearances of less than a fraction of a millimeter, said Agarwal.

The first part of the study shows that reprocessing “doesn’t clean implants but rather contaminates them,” he said.

Also, given the number and frequency of surgeries, “it’s impossible to follow these lengthy guidelines,” he added. “No hospital follows these guidelines verbatim, which puts them all under legal liability.”

Agarwal noted that hospital reprocessing departments are “very important,” but only for cleaning and sterilizing large instruments and surgical tools, not implants. It’s unclear how often a pedicle screw is washed and resterilized before it’s taken out of circulation, said Agarwal.

Reprocessed screws don’t have an expiration date, and there’s “zero inspection” of them, said Agarwal. “No one inspects each screw. It just lays there, cycle after cycle. Even the trays that hold them are dirty.”

Some countries, such as Scotland, have banned the reprocessing of implants used in spine surgery, said Agarwal.

Instead of reprocessing, Agarwal and his colleagues are advocating that each implant be presterilized, individually prepackaged, and “truly” used only one time.

He believes that in addition to eliminating the risk of transferring blood pathogens and other cross contaminants, these prepackaged, sterilized implants can provide significant economic, time-saving, and clinical benefits.

But single use, presterilized pedicle screws aren’t the only answer. There are risks for bacterial contamination from touching and from exposure to implants in the operating theater. These risks, said Agarwal, can be minimized by using a guard that shields pedicle screws or other implants until implantation.

Another study by Agarwal and his colleagues demonstrated such risks.

That study included two groups of sterile, prepackaged pedicle screws, one with an intraoperative guard made of biocompatible plastics/elastomers (group 1), and the other without such a guard (group 2). For each group, 26 samples were distributed among 23 spinal fusion surgeries in four different hospital groups.

Spectrophotometry testing detected saturated levels of turbidity (a measure of the degree to which water loses its transparency, owing to the presence of suspended particulates, in this case, bacteria) within 24 hours in samples from group 2. For the samples from group 1, no turbidity occurred for the duration of the incubation period (14 days).

“The guarded screws had no bacteria, and no further growth took place. With the unguarded screws, bacteria were present and continued to multiply,” said Agarwal.

The guard helps the surgical staff and surgeon maneuver the implant and attach it to the insertion device without any exposure or touch, he noted.

In general, medical device packages are well designed and are stringently labeled to eliminate waste. Where possible, pouches or blister packs should be avoided because they are prone to punctures, whereas rigid packages, such as tubes, are less so, said Agarwal.

“In the past several hundred cases using outer tube packaging with an intraoperative guard inside, there was not a single case where surgeons opened an incorrect tube or package,” he said.

Agarwal noted that guards are used in other types of surgery. For example, in breast augmentation procedures, surgeons use a sterile guard called a Keller funnel to handle breast implants, and in general surgery, it has become standard practice to use wound protectors to avoid contamination of the irrigation fluid from the wound edges.

Agarwal has submitted an official petition to the US Food and Drug Administration to investigate the safety of reprocessed and unguarded implants.

“A regulatory oversight is very important for immediate changes required for public safety,” he said. “It falls under their jurisdiction as class II devices.”