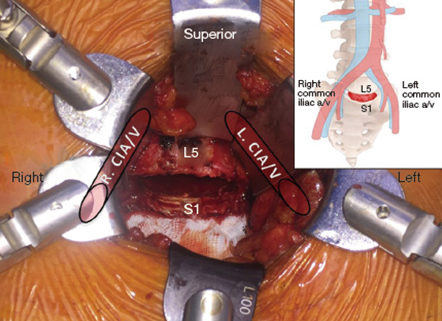 The defendant performed decompression of the discs at the L4-L5 level. During the procedure, an iatrogenic injury (an injury caused by a physician) occurred; specifically, an injury to the plaintiff’s left common iliac artery. During the operation, the defendant saw a flash of blood that he believed had to be looked into immediately. Therefore, he first checked with the anesthesiologist to ensure that the patient was hemodynamically stable, and, finding out that she was, he asked the nurse to bring in a vascular surgeon who was nearby. The vascular surgeon, while exploring the area, found a pseudoaneurysm (a hematoma that forms as a result of a leaking hole in an artery) of the medial aspect of the left common iliac artery. He placed a stent graft across this area that resolved both the pseudoaneurysm and the bleeding.

The defendant presented an affidavit from a board-certified neurosurgeon—the same specialty as the defendant—who opined that all the care rendered by all the defendants was within accepted standards of neurosurgical practice.

This neurosurgeon then elaborated on this opinion. First, he pointed out that the defendant, who was a private treating surgeon, took a detailed history from the plaintiff that included an MRI and a review of two earlier lumbar MRls. He then appropriately discussed with the patient the options, risks, benefits, and alternatives to the surgery and recorded this discussion with the plaintiff in a note in her chart. The defendant’s recommendation for surgery was indicated (according to the defendant’s expert) because medication and epidural therapy had failed to relieve the plaintiff’s pain.

As to the surgery itself, despite the injury to the iliac artery, this expert maintained that the surgery was properly performed and that everything the defendant had done, including the removal of disc fragments, had been done well. Further, during the surgery, the defendant took appropriate precautions, such as using the gradation of his instruments and fluoroscopy guidance throughout the procedure. Despite these precautions, an undesirable event did occur, and upon seeing a flash of blood, the defendant appropriately acted by first checking on the plaintiff’s status and then immediately calling in a vascular surgeon.

Perhaps the most important part of his opinion was his indication that the injury to the common iliac artery, which according to the expert bifurcates at around L4-L5, is a known risk of this procedure. Therefore, the expert maintained that there was no negligence by anyone. Further, none of the injuries suffered by the plaintiff were proximately caused by any negligence.

The expert’s affirmation succeeded in establishing a prima facie case of entitlement to summary judgment. Therefore, the burden shifted to the plaintiff to show that issues of fact, negligence, and proximate cause existed. The plaintiff attempted to do this by submitting an affidavit from a board-certified orthopedic surgeon. The plaintiff’s expert is a well-credentialed physician who stated that he is an Associate Professor of Orthopedic and Neurosurgery with a major University Hospital. He also stated that he has performed this procedure about a thousand times and is familiar with the applicable national standard of care, whether the surgery is performed by an orthopedic surgeon or a neurosurgeon.

The plaintiff’s expert reviewed extensive records in this case and concluded that the defendant definitely breached the standard of care and that this breach was a substantial factor in causing the plaintiff’s vascular injury and sequelae. Specifically, this expert stated that the defendant deviated from appropriate surgical standards by “losing control of the instruments,” which allowed for a breach of the Anterior Longitudinal Ligament (ALL), which is the entrance to the retroperitoneal cavity where (according to this expert) the left and right common iliac artery are found. He also pointed out that in a presurgical MRI, the plaintiff was shown to have no vascular anomalies.

The ALL is the closest ligament to the abdominal viscera and blood vessels in the retroperitoneum. When a patient is prone, lying on the stomach, the surgeon goes through the posterior longitudinal ligament in order to enter the disc space. Therefore, this expert explained, to cause an injury to the iliac artery in the retroperitoneal space, the surgeon must penetrate the ALL. This physician did note that precautions to avoid this kind of injury were taken. Specifically, the surgical instruments used have depth markings on them, and fluoroscopy guidance was used throughout the operation. However, despite these precautions, the surgeon was negligent because he was in the retroperitoneal space where he should not have been. The expert further explained that in patients such as the plaintiff, who had no vascular or abdominal abnormalities, there is no acceptable reason why the retroperitoneal space should be entered during the performance of a routine posterior microdiscectomy or standard decompressive posterior lumbar procedure.

Also pointed out by this physician, who stated that he had read the defendant’s deposition, is that the defendant agreed that for this injury to have occurred, the surgeon would have had to have violated both the annulus (the hard posterior part of the disc) as well as the ALL. He also pointed to the defendant’s answer in his own deposition to the question, “What caused the injury?” The defendant said, “I don’t know. I think that obviously we had a violation of the annulus and obviously we damaged the vessel…”The defendant also acknowledged that the injury was caused by a surgical instrument.

The expert concluded his statement with a discussion of the aftermath of the surgery and the repair of the artery. The plaintiff developed a left iliac vein thrombosis and required hospitalization in the intensive care unit. She experienced severe pain and required multiple blood transfusions, antibiotics, anticoagulation, and antispasmodics therapy. He also pointed out that the anticoagulant therapy is permanent. Finally, he opined that because the surgery did not successfully deal with this patient’s pain, normally a second surgery with an anterior approach would be considered; however, that would be contraindicated here because of the previous vascular injury.

Defendant’s counsel argued that his motion should be granted, as there is no evidence anywhere to suggest that he “lost control” of his instruments, as was discussed by the plaintiff’s expert. However, the court could not disagree more with this evaluation.

The basic and critical difference between the defendant’s expert’s view and that of the plaintiff’s expert is whether or not the injury to the common left iliac artery was an unavoidable risk of the procedure. The defendant’s expert stated that it was. The plaintiff’s expert stated that it was certainly not, because for the injury to have occurred, the surgeon had to have entered into the retroperitoneal cavity, where he had no reason to be. Therefore, the cutting of the artery was outside the immediate surgical site, as there was also a barrier between the structures found in the retroperitoneal cavity and the surgical site, the annulus, and, most importantly, the ALL.

The Court found that the plaintiff had successfully sustained her burden in showing that issues existed as to whether or not the defendant’s performance of this surgery was within acceptable standards. If it was not, then it is obvious that such a deviation was a proximate cause of the injury and its sequelae.

Accordingly, the court ORDERED that the motion for summary judgment by the defendant be in all respects denied.

An Error Becomes Homicide in the U.K.